From Barley to Barrel – Whisky Distillation 101

At Bootleggers Beer, Wine and Distillery Tours of Niagara, we pride ourselves on offering the most educational tours in the Niagara Region of distilleries, microbreweries and wineries.  It’s about sharing an appreciation for the land the raw materials come from, getting to know the people who perform a labour of love, and celebrating the craftsmanship behind what makes a libation great.  When you know something about how your favourite product is made, you begin on a journey of deeper appreciation that enhances your enjoyment of the product and encourages you to seek out new products of a similar style.  To that end, Bootleggers has put together this piece that covers the basics on the creation of whisky.  Cheers!

Whisky is a spirit derived from the fermentation of grains, matured in oak barrels, and (usually) blended before being bottled.  It is possible to create an alcoholic beverage from any plant material that contains fermentable sugar.  In the case of whisky, the source material is most often barley.  When barley is in its raw, harvested form, the sugar is locked away as insoluble starch and must be coaxed out of the grain in a process called conversion.

Conversion can be broken down into three steps: steeping, malting, and mashing.  Steeping is when raw barley is drowned in water to allow the outer wall of the seeds to break down.  To malt the barley, the water is removed and the seeds are placed in a warm, humid environment where they are encouraged to germinate.  The germination converts the insoluble starch into a starch that is soluble.  Germination also releases enzymes that will later convert the soluble starch into fermentable sugar.  After a short period of growth, the malted barley seeds are heated in a dry environment to halt the germination.  Next comes mashing, which is when the malted barley is crushed and mixed with hot water.  When the soluble starch is mixed with hot water, the enzymes released in the germination convert the soluble starch into fermentable sugars.  This sugary solution is called wort, and it will be fermented into a low-strength alcoholic liquid called wash.

Barley is the best grain for making whisky because it contains more enzymes to convert soluble starch into fermentable sugar than any other grain.  Some whiskies promote themselves as being made from other grains such as rye, wheat or corn.  In most circumstances, when whisky is made from these alternate base materials, it will still be necessary to use some barley to aid in the conversion process.

Distillation: What is it and how does it work?

Beer is brewed, wine is vinified, and whisky is distilled…but what does distill actually mean?  Distillation is a process whereby a low-strength alcoholic wash is concentrated by removing the alcohol and the flavour compounds (called congeners) from the water.  This is accomplished by heating the wash to a temperature that is higher than the boiling point of alcohol (78.3oC) but lower than the boiling point of water (100oC).  When this happens, the alcohol and some congeners turn into vapour and rise as gas, but the water remains liquid and stays behind.  The vapours cool as they rise away from the heat source at the bottom of the still and then return to liquid form due to condensation.  This new liquid is called spirit, and it will be stronger in alcohol and flavour compounds than the wash.  Depending on the type of distillation system used, it is possible to create spirits with varying concentrations of alcohol and congeners.  Pot distillation and column distillation systems are described below.

A pot still is a cylindrical chamber made of metal in which an alcoholic wash is heated.  The vapours of alcohol and congeners rise and then fall down a tube called a swan neck where they are condensed and concentrated as spirit.  This is a single distillation system and it is the most rudimentary of all distillations.   It is also the least efficient system.  A single distillation is capable of producing a spirit at a strength of 25% alcohol by volume (abv) from a wash that was 10% abv.  A second distillation will boost the concentration to 75% abv.  Most spirits need to be over 80% abv before they are reduced to a bottling strength of 40% abv by adding demineralized water.  Multiple distillations are costly and time consuming.  For this reason, most distillers will use a more efficient column still.

A column still is a tall, cylindrical chamber with multiple ascending layers.  Like a pot still, the bottom holds the wash and the heat source that causes the boil.  Each layer above the wash contains a metal tray with perforated holes.  As the vapours of alcohol and congeners rise higher, they pass through subsequent trays.  Eventually some alcohol and some congeners will reach a height at which they become cool enough to condense into a liquid.  Different forms of alcohol and congeners have varying boiling temperatures.  They will condense at subsequent levels in the chamber and fall onto trays at different heights.  When a tray becomes too full of spirit, it will overflow and fall onto the tray below it in a process called reflux.  Mini distillations will take place between trays resulting in a spirit that is highly rectified (alcoholic) on the top tray.  This process is desirable because it allows the distiller to pull different spirits from different trays to use in the final blend.  Some sophisticated distillation systems will be made up of as many as 40 trays.  They will contain multiple columns divided into analyzers (chambers where vapours heat and rise) and a rectifier (a chamber where the spirit condenses).  This process is very efficient, allowing a spirit to be rectified to an abv of up to 96%.

Not all alcohols and congeners are made equal.  Depending on their flavour, it may be more or less desirable for them to be included in the final spirit.  Different alcohols and congeners have slightly different boiling temperatures.  The first vapours to come over the still and condense in the swan neck will be different, and will taste different, than the last vapours to rise and condense.  For this reason, the distiller divides the vapours into three parts: the heads are the first vapours to rise and condense in the still, the hearts are the middle portion, and the tails are the vapours to rise and condense last.  There is no hard line where the heads become hearts, and where the hearts become tails, which affords the distiller some artistic license in making the cut.  Some heads may possess light, flowery aromas that would be desirable in a gin, but undesirable in a whisky, whereas some tails may contain pungent aromas that a whisky distiller could appreciate, but that would spoil a delicate gin.  Once the distillation is complete, the distiller will take the spirits from the desired trays and place them into an oak barrel for maturation.

All rectified spirit is clear, regardless of its base material.  The colour, as well as additional flavours, come from a period of time spent maturing inside oak barrels.  In fact, up to 70% of a matured spirit’s flavour can come from the wood it was matured in.  Maturing spirit in wood is all about adding character and fostering flavour.  The benefits of oak maturation can be divided into four parts: 1) The spirit will take on new flavours from direct interaction with the wood.  2) The porous barrel allows the spirit to breathe and a slow oxidization softens the harsh alcoholic character.  3) Some components in the spirit will evaporate (referred to as the angel’s share), which will concentrate the remaining components and change the overall balance.  4) Components in the spirit interact with each other over time and give rise to new flavours and aromas.  The utmost care must be taken to ensure that spirit is matured in high quality wood, as a poor quality wood can irretrievably taint the spirit.

Whiskies are not vintage products and most are created by blending together several spirits before bottling.  This achieves a consistent flavour and character from bottle to bottle.  The distiller must have a vast number of spirits on hand from which to pull to create the blend.  These spirits will vary by age, will come from different barrels, will be distilled in pot or column stills, and be derived from different base ingredients.  Having many spirits on hand from which to pull ensures the distiller can achieve the right balance to make a final product that tastes the same every time.  Caramel may be added to add colour, or, colour may be removed using filtration methods.  Consumers of spirits expect each bottle to taste exactly like the last bottle they bought, unlike wine which is celebrated for expressing itself differently depending on the year the grapes were harvested.  Before bottling, the alcoholic strength is usually cut to 40% abv by adding demineralized water.  This makes the beverage more approachable and encourages the flavours to open up.

Discover the Distilleries of Niagara!

Ontario possesses a long and rich history of whisky distillation which has enjoyed a renaissance in recent years.  The number of craft distilleries in Niagara alone is growing rapidly and now boasts Dillion’s Small Batch Distillers in Beamsville, Syndicate Restaurant and Brewery in Niagara Falls, and Wayne Gretzky Estates Winery & Distillery in Niagara-on-the-Lake, among others.  The best way to cultivate an appreciation of Ontarian whisky is to head to the source of production.  Bootleggers offers tours of Niagara’s distilleries year round!  Long renowned as a producer of quality wines, it is no longer fair to refer to Niagara simply as “wine country.”  Credence must be paid to our local distilleries too and it is only right to label Niagara as “whisky country” as well.  See you there! 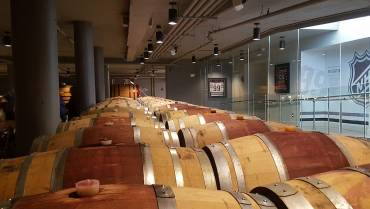