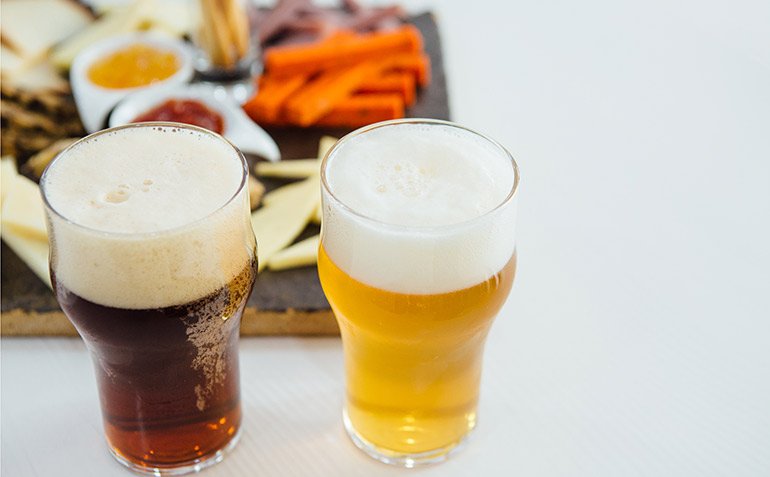 Lager and Ale – What’s the Difference?

Beers fall into one of two categories: lager or ale.  All other types of beer like pilsner, IPA, and stout are offshoots of one of these two primary styles.  So when it comes to lager and ale, what’s the difference?

Often people will say that a lager is pale in colour and that an ale is dark in colour.  While this is probably more often the case than not, it is not always true.  The colour of a beer is determined by the degree of roasting the barley receives prior to alcoholic fermentation.  Barley that is lightly roasted will create a beer that appears yellow or golden, while barley that is roasted to a greater degree will make a beer that appears red, brown, or even black.  So if the colour doesn’t determine which beer is a lager and which beer is an ale, what does?

Generally, lagers are known for having a texture that is crisp and refreshing, a body that is light, and a flavour that is clean.  Think of Niagara Brewing Company’s Niagara Premium Lager or Silversmith Brewing Company’s The Black Lager.  (A great example of a lager that does not look like a lager to the eye!)  Ales are known to have a mouthfeel that is round, a body that is medium to full, and a flavour that is fruity and spicy.  Think of Silversmith Brewing Company’s Hill 145 Golden Ale or Niagara Oast House Brewers’ Barnraiser Country Ale.

The biggest factor that makes the difference between a lager and an ale is the variety of yeast used in the alcoholic fermentation, and it is arguably the determining factor from a purely scientific perspective.  Lager is made from a variety of yeast called Saccharomyces Uvarum.  It ferments at a cooler temperature (7oC to 13oC) and at a slow rate (several weeks).  The result of the slow, cool fermentation is a beer that tastes crisp and fresh with flavours of hops and malt.  After fermentation the beer is rested before consumption.  This period of rest is known as “lagering” which is where the word “lager” comes from.  Ale is made from a variety of yeast called Saccharomyces Cerevisiae.  It ferments at a warmer temperature (16oC to 24oC) and the fermentation period is fast (3 to 7 days).  The fast, warm fermentation inspires flavours that are fruity and spicy, and the beer is ready to be consumed shortly after its fermentation.

Hops are the flowers of a plant which grow on a bine.  (Yes a “bine”—it’s not a typo.)  They are used to add structure and backbone to beer by contributing a bitter flavour.  While “bitter” may sound unappealing at first, a bitter component is necessary to balance beer’s natural sweetness and fruitiness.  The degree of hops or bitterness in a beer is measured in IBU (international bitterness units) on a scale of 1 to 100.  Lagers will possess a low IBU (10 to 20) while ales can possess a considerable IBU (20 to 100).

The best way to experience the difference between lager and ale is, of course, to taste the two side by side.  Bootleggers Niagara Beer, Wine & Distillery Tours offers professional and educational tours of Niagara’s beer scene year round.  Contact 1-866-628-5428 today to book your Niagara beer tasting tour and come out to appreciate some of the best lagers and ales being brewed anywhere!